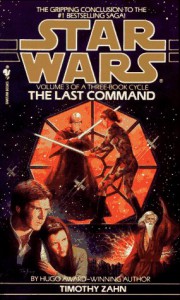 I only just recently got into Star Wars, movies and all. I was thinking of just sticking with the movies, but I had heard so many great things about "The Thrawn Trilogy", and how much more complex it was compared to the books, so I gave into curiosity and read through it.

It took me a while to finish the three books due to real life problems, but it was more than worth it. It's an exciting romp, with a lot of interesting connected stories and cool moments. Even if it weren't a Star Wars story it's a very fun sci-fi tale, kind of pulp-y but with some surprisingly dark and more cerebral moments.

However, reading this book made me understand why some people call the Expanded Universe glorified fanfic, since at times the overall feel of the story is very different from that of the movies, due to the bigger focus on political maneuvering and some sci-fi cliches that the films avoided that here are played straight. Those elements really stand out among the rest, especially after those smaller, lighter comic relief moments where the characters do act more like their original counterparts. That said, I do enjoy this kind of "fill in fics", so I really had a good time with this story.

While the prose is pretty exciting early on, to the point that I could pick up the book after a few weeks of leaving the book aside (because of the real life problems mentioned above) and still have the story fresh in my mind, by the end of the second book I ended getting used to it, somehow. While reading the last one I wasn't drawn into the action like I was earlier, and at some point I even found myself predicting or nitpicking some of the word choices by the author.

Another personal negative point is how the original characters, while starting off potentially very interesting, in the end they felt a bit flat. Even Thrawn, as cool as he definitely is through the story, by the mid point gets a bit boring with his being always one step ahead of everyone else. And while this makes it his end much more ironic, it had already gotten old for me.

Despite these negatives, the secondary plots were still interesting, and while there were a lot of them the story never felt bloated. Overall it was really enjoyable even if I did experience some ending fatigue, which might have been due to the pauses between a book and the other. The parts I liked I really enjoyed, thoroughly, to the point I will give a check to the other books the author wrote.